Wukong is a character from one of my current favorite video games known as the League of Legends, or known more commonly as LOL. Today, I will be talking about the resemblance between this monkey character and my Hanuman.

First of all, the character Wukong was based on the Chinese god, Sun Wukong. Let me counter with this another question? Did you actually know this? Or did you figure it out flying playing Smite? The whole reason this posts exists is to compare two characters I find similar. Although they can be considered unrelated, they have similarities.

Hanuman is from Indian mythology and since I am of Indian heritage, one of my childhood characters. His basic story is the son of the God of Wind. Don’t ask me why he was a monkey. He just was. According to what the stories I heard in my childhood, Hanuman, as a, let’s stay, a new born, was flying through the sky. You know, like most human babies with monkey faces. somehow he exceeded the speeds needed to break through the earth’s atmosphere and drifts off into the space.

Remember we are using the logic of a five year me and other stuff from mythology. So, in a matter of minutes he flies close to the sun and no, that’s not a metaphor, he literally flew into the sun. Through the magic of he is a monkey baby, he somehow survives not just going headfirst into a gigantic ball of hot gas and plasma, but also somehow plummets back into the earth as if gravity exists in space and he meteor-style crashes into the ground. This episode is akin to burning your hand on the stove by accident and you spill the popcorn everywhere.

His primary story is that he helped King Rama (a god with a bow and arrow) battle the supposed demon king Ravan (a guy with ten heads, honestly, it really creeps me out; I am not sure why it didn’t creep me out when I first heard of the story. Maybe I was a tough thug when I was 2, but I don’t know) and rescued Lady Sita, Rama’s wife who was abducted by Ravan.

During battle, there is a cool story. Lakshman, Rama’s brother was hurt and needed a herb to be revived. The battle was in Sri Lanka, but the herb was in North India. So basically, Hanuman flew with his magic and went to the mountain, but couldn’t find the herb, so carried the whole mountain and flew back to Sri Lanka. He gave the mountain to eat. Maybe I threw the last part in, but you get the point. 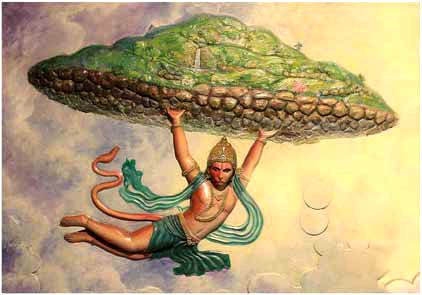 So Hanuman was a devotee of Rama. And he was a strong, courageous god, apparently. When I was very young and believed the stories that my grandparents told me as real, Hanuman was my favorite God, out of the many.

Now that we have run through all the shenanigans, let’s go into the real stuff.  How do Hanuman and Wukong compare?

I have put together a bunch of cool Wukong stuff from Amazon that you can buy if you are a fan. If you buy using my link, I will get paid small commission, which I will then use to buy more skins for Wukong on LOL.