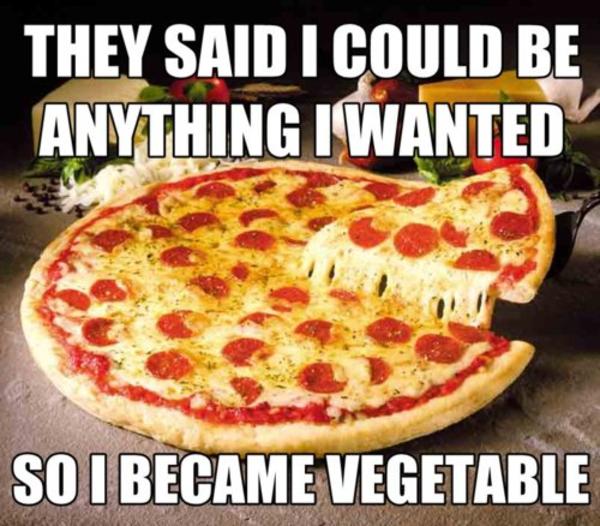 The science of pizza being a vegetable is a highly debated topic that exceeds the reach of our universal ancestors from the past and is clearly a more debated topic than subjects like evolution, the idea of god, the Big Bang. Clearly, all of these subjects inquiring about our existence in the world and in the place, we call the universe are all futile and add no true value compared to the age old question whether or not a slice of bread with tomato sauce and heated cheese can be considered a vegetable.

Obviously, this very thought exceeds many humans as it is simply too complex to be comprehended by most people. Deep in the minds of the most brilliant humans that have ever existed in history know to ask this question. Even the most brilliant minds in the history such as Albert Einstein, Stephen Hawking did not consider this question. But through the millennia that humanity has spent evolving and growing, we have finally asked the question. But the question is just one piece of the 300 piece answer. Now, as humanity grows, we struggle to grasp the idea behind the question. Now that we have asked it, we are moving on. It is obvious that we will spend the next seven millennia pondering this question. The world may end in fire before we figure out the science of a pizza being a vegetable.

Now that I have come into existence, I might be able to answer the age-old question. Pizza is a type of food. Food is meant to be eaten. Humans eat food. In order to understand why we eat food, we need to go back to the rules of nature. Kill or be killed. If you look at scientifically, we are eating to survive. Therefore, we eat pizza to eat survive. Therefore, we need pizza to survive. From this deep standpoint on life, can we finally conclude that pizza is the next step to nirvana for humanity? Could pizza be nirvana itself? Or the creator of the nirvana? Could pizza be god in the flesh?

In order to figure this out, we need to go into deep of the catacombs within the last lands of Egypt. First, find the secret key at the bottom of the catacombs. Then, you must ingest the key as the secret gods will attempt to the take the key. You must go to the north pole at the tip and find Santa’s workshop. Although the elves won’t let you in, you must find a way. Once you do, you have to make it past the hidden dragons protecting the secret layer. Once you make it past the dragon, you must regurgitate the key and then unlock the secret cave. Take the secret tunnel down into the path of the dead realm. Then you must maneuver past the secret snow biome using the two triple sided snow shoes you have been hiding in your pants. After ditching the snowshoes, you must use the handgun hidden deep inside your pocket. And you must shoot the head of the statue of what do you know it, a statue of a man, except his head has been replaced with a slice of pizza. You must shoot the pepperoni right in the middle of the slice of pizza. Then you will have access to what the government has been hiding all along. You will find ancient Greek pentagram that detail the language forgotten. Once you learn the language, you must head back to the hospital where you were born. As we all know, every single hospital has an underground secret room. This room has the secret code for every child born there. You are guaranteed to have one special secret code for you. To find this, you must use the secret language learned from the pentagram. Figure out the secret message to find the code, Open Seasame. And then rattle along about a secret code that some painter laid down for you. After you find the secret code laid down when you were first born, you will finally find it.

It must have been a long journey to find the secret that the world has hidden from us. If pizza is our god, that means each ingredient, that a plain pizza requires must be the god’s original angels. Route back to your house and collect all ingredients to make the pizza until you figure out the final clue. Pizza requires cheese, bread to make. Those are simple ingredients. The one thing that is holding everything together – tomato sauce. Tomato is the secret. With this algorithm, we as humanity have finally found the secret to being a vegetable. Pizza isn’t actually a vegetable. The question is: “Is it a fruit?” My genius produced an answer that millions of years couldn’t solve and come up with a new question: “Is Pizza a fruit?” Only the select few of you that will read this will now know the truth. Through my research, those who will read this post will reach a new stage of nirvana. With this new information, humanity will continue. I don’t expect humanity in this current state to think anything of my discoveries. But years later, when we have evolved beyond the genius that we consider and have an IQ of 300 and above, they will find this post and they will use their new abilities to find the next question in the puzzle. Once we finally find the answer, we will realize that we may have solved the world. After that, there will be nothing more for science to solve. There will be nothing more new for the world to throw at us. We will become the Supreme Beings and gods among legends will we conquer.